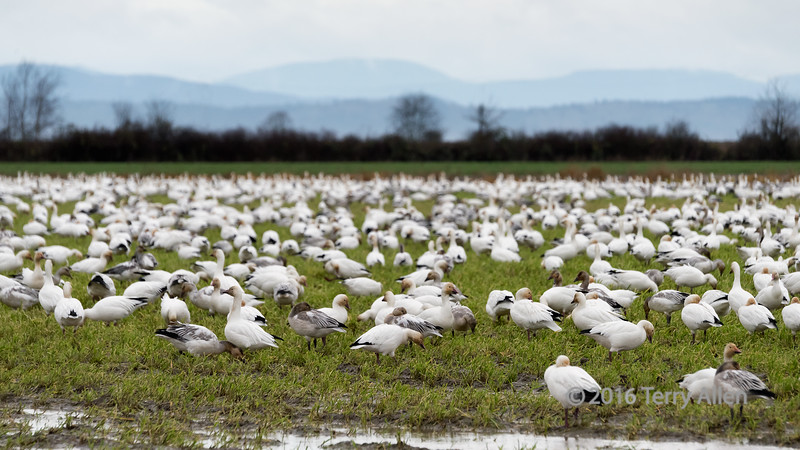 Every year in the fall thousands and thousands of lesser snow geese (Chen caerulescens) migrate 5000 km down the Pacific Flyway from their summer homes on Wrangal Island, Russia. A large population, estimated at 20,000 birds, overwinters in the intertidal marshes and the farmer's fields on Westham Island in the Fraser River estuary near Vancouver, BC. Local farmers all participate in a program called “Greenfields” which coordinates the fall planting of green growing grass cover for these geese, and other wildlife, to eat during the winter. The grey birds are the young born earlier in the year. The faces of the birds are stained orange by the minerals in the ground.

Today I was very lucky to see a huge flock of thousands of the birds in a farmer's field right next to the rural road on Westham Island, and watched in fascination while several large flocks flew over my head to join the group on the ground. The mountains of Vancouver Island are in the background. After photographing them for around 15 minutes suddenly the entire flock of birds arose as one from the field and flew off, darkening the sky with their bodies. What a thrill to see! Needless to say, the motor drive on my camera was clicking full speed!